The Next Generation in Super Energy Efficient Hot Water Heating

Just like heat pump technology revolutionised home heating in New Zealand all those years ago, the same technology is now also used to effectively and efficiently heat domestic hot water.

How Efficient Is a Hot Water Heat Pump?

The efficiency of a heat pump is known as the Coefficient of Performance or COP. This is a ratio of the heat delivered to power consumed. For every 1kW of electrical input energy, The Black Diamond Hydrobox Hot Water Heat Pump absorbs freely available heat energy from the outdoor air to provide the home with an average of at least 3.2kW*1 of heat output.

*1 As independently tested by BSRIA based upon BSEN14511 Part 3 standard rating conditions. Due to the method of operation, the performance of heat pumps will vary based upon the temperature of the heat source and the requirements of the heat delivered. The BSEN14511 testing relates to the heat pump performance only and not the entire heating system.

How Does it Work and what are the Key Components?

A Black Diamond Hydrobox Hot Water Heat Pump is made up of 2 key components that seamlessly work together to provide super energy efficient water heating – the outdoor unit and the Hydrobox Heat Exchanger which connect to an existing or new cylinder.

The Black Diamond Hydrobox Hot Water Heat Pump System incorporates an outdoor unit just like any heat pump space heating system. It uses electricity to absorb freely available warmth from the surrounding air and then transfers it to your home so it can provide energy efficient hot water heating all year round.

The system utilises next generation R32 refrigerant in the outdoor unit which has 1/3 the Global Warming Potential (GWP) of R410A commonly used in other systems, meaning it is better for the environment.

The Hydrobox ensures water is heated to 62°C and is fed directly into the top of the cylinder. This means that this water is ready to use straight away. In a traditional electric system it can take hours to heat the water cylinder enough to produce 60°C water from a cold tank situation.

Furthermore, the system features fast recovery of a full water tank and can reheat an entire 180L cylinder in 2 ½ hours where traditional electric cylinders can take up to 3 ¼ hours in winter*.

* Based on tank heat-up test at 10°C ambient temp.

The Black Diamond Hydrobox Hot Water Heat Pump System is designed to easily integrate with existing hot water cylinders so you can benefit from capital cost savings on retrofits.

Made in NZ, for NZ's Low Temperature Conditions

The locally developed and tested Black Diamond Hydrobox Hot Water Heat Pump System is specifically designed to provide hot water for the whole family all year long, no matter what the temperature outside.

Tested in some of the most extreme environments in New Zealand, the Black Diamond Hydrobox System has been designed with cold temperatures in mind. In fact, it can effectively operate in a wide temperature range from -15°C all the way up to 45°C.

A Great Return on Investment with Quick Payback Time

The estimated return on investment of a Black Diamond Hydrobox System, when compared to a gas or direct electric heating system, could be as low as three years*.

There are ways of reducing this payback period further, such as taking advantage of lower cost nightly electricity tariffs available; reducing homeowners’ energy bills by heating the hot water cylinder during the night. Large households with high hot water usage could bring the payback period down significantly.

* Payback period comparison based on average energy supplier costs per kWh over an average winter heating period. Actual savings may vary in line with gas and electricity price fluctuations and seasonal conditions. This is an estimate only.

Good for the Environment with Minimal Carbon Foot Print

This makes water heating one of the largest single sources of greenhouse gas emissions from the average Kiwi home. As such, EECA has identified heat pumps as playing a key role in the ability to significantly reduce costs and greenhouse emissions from energy use.

*1 Based on electrical and gas emission factor for New Zealand.

*2 Based on E3 Policy Framework data for New Zealand. 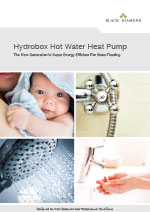